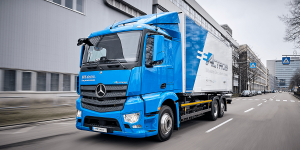 Daimler gathered the press for an early presentation of the Mercedes-Benz eActros today. The electric truck has a range of 200 km and is on its way to the first clients to go into testing operations for a year.

The eActros builds on the existing model, but Daimler insists that the rest of the architecture is decidedly electric. The axle for example is a solution by ZF that Mercedes also uses in its hybrid and fuel cell buses. The eActros will become available in both two and three axle variants and can carry up to 11.5 tons per axle.

Two electric motors serve for propulsion with 125 kW each and a 485 Nm peak. There are 11 Li-ion battery packs with a combined capacity of 240 kW, said to last for 200 kilometres. The batteries are responsible for the entire energy of the electric truck, including braking and air condition for example. Recharging is through CCS.

So far, Daimler has readied ten eActros that will make their way into commercial fleets. The focus of the real-life trials is on inner city deliveries and testing is to commence over 12 months. After that, another year of tests at other clients is scheduled so that the eActros won’t become available in earnest before 2021.

The trial however is supported by the state as part of the so-called Concept ELV² project that received a total of 10m euros in funding through the German ministry for the environment (BMUB) and the ministry for economy (BMWi).

Daimler has been pushing the electrification of the utility segment rather forcefully lately, although most vehicles will not become widely available before the beginning of the next decade. Nonetheless, the next Sprinter features an electric variant due by 2019. The lighter eVito though will hit the shelves this summer reportedly.

Also the Fuso eCanter has been launched and reached the first clients in Europe and the States for trials. Still, the production is limited to 500 units for now until production is to ramp up next year.

The official launch of the eActros is set for the IAA for utility vehicles this September.