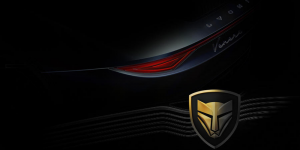 Chinese LVCHI wants to make a big splash at what will be its debut at the Auto Salon in Geneva with the Venere. The EV was designed in Italy and LVCHI has now released a first teaser and some technical details.

LVCHI has conceived the Venere concept together with I.D.E.A. short for Institute of Development in Automotive Engineering in Turin reportedly.

New data released by LVCHI now position the four seater in the racy segment. Four electric motors couple together for 740 kW and an acceleration from 0 – 100 in less than three seconds. Top speed of is set at 250 kph. The battery holds 100 kWh, enough for 500 km according to NEDC.

Despite its length of over 5 metres, the Venere weighs just over two tons thanks to a carbon body designed by the Italians.

The car on show in Geneva will be a production-ready example according to LVCHI. However, previous reports suggested that the Venere will still be closer to a prototype. Yet, the idea is to kick-off production by 2019. Not in China though but Turin itself. This fact points to a rather small production run.