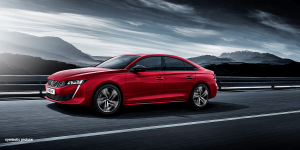 Peugeot just allowed a preview of the new 508 due to premiere at the Geneva Motor Show. The new edition is based on the corporate EMP2 platform and will be available for purchase by autumn. A plug-in hybrid version is scheduled to follow no sooner than by late 2019.

The new edition of the vehicle underwent an aggressive redesign, with the declared aim by the manufacturer to turn it from a classic four-door notchback saloon into a five-door coupe limousine with a fastback.

More details to the hybrid version of the vehicle are currently unavailable, apart from that it will be produced in the French Mulhouse. The other French manufacturing locations Trémery and Douvrin will supply the power units.