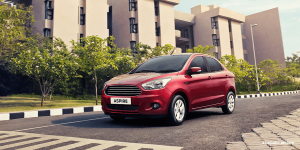 Ford and Mahindra have announced a partnership to produce the potentially least expensive electric vehicle ever made. The model will be based on the compact Ford Aspire.

The two companies signed an MoU last autumn to initially cooperate for the next 3 years, which will cover joint work on electric vehicles and global distribution. The companies have also begun designing an SUV, which will be marketed under their respective brands, once development is complete.

The cooperation will also benefit Mahindra, as they plan to overtake the Indian market leader, Maruti Suzuki, which plans to begin producing electric vehicles in 2020. Ford will certainly benefit from the joint venture with increased market access and  potential government orders, however there currently little information is available. According to a Ford spokesman, “It is too early to discuss details and comment on speculations at this stage.”