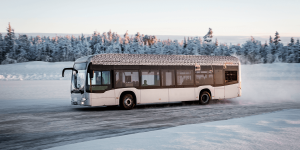 Mercedes has released technical details of its electric bus Citaro due to premier this September before going straight into serial production. The 12 metre electric bus revolves around an electric portal axle and a modular battery set up.

The Citaro’s portal axle got electric motors at the wheel hubs. The peak output of the electric motors is 2 x 125 kW, while torque is 2 x 485 Nm, according to the Daimler press release. Li-ion batteries aboard the bus deliver 243 kWh for the Citaro in the full set up.

The power is split between up to a maximum of ten modules. As well as two battery modules on the roof, the standard equipment includes four modules in the rear of the bus. Another two or four battery modules may be mounted on the roof if the client requires so.

For the start of series production, Daimler offers charging via a Combo 2 connector. In future, there will also be an option to charge the Citaro via a pantograph. While charging, the bus can be heated or cooled off before it sets off. For further thermal management Daimler has installed a heat pump.

Mercedes quotes a “worst case scenario” range taken from the ‘Standardised On-Road Test cycle’, SORT2. According to this, the Citaro with a full complement of batteries can achieve an operating range of around 150 kilometres in the summer without opportunity charging.

First to try the Citaro in a real world application will be the Rhine region, where the electric bus is made. Daimler has signed an agreement with Rhein-Neckar-Verkehr GmbH (RNV) for deliveries to begin in late 2018 (we reported).