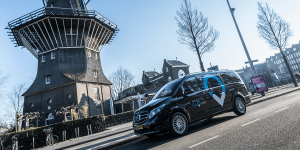 ViaVan, a joint venture by Mercedes-Benz Vans and the U.S. startup Via has started its on-demand shuttle service in the Dutch capital. They will use the Vito and V Class as well as the electric B Class until the arrival of the eVito. More cities are on the list.

Amsterdam is the first city in Europe that got the new service though. Then the shuttle service is to launch in Berlin this summer (we reported). Daimler and Via have also listed London and say they are just awaiting the final approvals.

The service is app-based and seeks to pool passengers going in the same direction. In Berlin for example, Daimler has teamed up with public transport provider BVG. Vans will come to predefined pick up points such as bus stops. Pricing varies between a ticket and a taxi.

The same principle applies in Amsterdam, enabling ViaVan to offer a very competitive price. Rides within the central city zone will cost a flat rate of 5 euro. As an initial offer, all rides within this zone will be just 2 euros for the first two weeks.

Passengers must share all rides and each journey starts and ends at a virtual stop so it is not quite like sharing an Uber cab. Algorithms created by Via calculate in real time which journeys to pool.

ViaVan is registered in New York, where it says it provides more than 1.5 million shared rides per month. In Europe, ViaVan will use Daimler’s Vito as well as the V and C Class until the eVito arrives this summer, or latest by the year’s end. Mercedes electric van is winter testing near the polar circle at the moment before it is to hit the hot streets of Spain.

The electric transporter can be pre-ordered for 39,990 euros. An 84 kW electric motor powers the eVito, and customers can choose between top speeds of 80 or 120 kph. It can reach a 150 km range, according to WLTP.

However, Daimler is not planning any CCS fast-charging, leaving one wonder how the fleet will be operated. The ViaVan service includes professional drivers though.