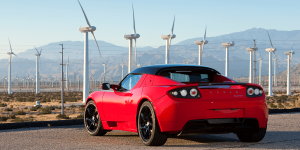 Almost to the day ten years ago, Tesla started producing the Roadster. Their mission to make electric cars sexy has since changed from r-evolutionising the car industry to turning the world’s energy supply around and while Tesla now works 3 models at a time, some things have not changed.

Moreover, Tesla is about to revive the Roadster. An even hotter version is to hit the shelves by 2020 reportedly and Elon Musk has started to make noise ahead of its revival, advertising the new Roadster as “the fastest production car ever”. To prove his point, the Tesla boss used the most phallic of symbols at his disposal, his roly-poly SpaceX rocket to shoot the Roadster into the sky on a mission to Mars.

But back to earth, where the success of the rooky EV maker from California has indeed spurred the industry’s electrification that is accelerating. Other factors such as tightening regulations and Volkswagen’s homemade diesel-gate are playing a part as well in the growing lineup of electric cars of course, but none other model than the Tesla Roadster has managed to feed the fantasy of so many owners and even more aspiring buyers waiting for the Model 3.

The Model 3 is hotly awaited as well and production delays which Musk had called “manufacturing hell” are plagueing Tesla to this day. However, they are not new. The San Francisco Chronicle has dug out an old company update from March, 17, 2008 in which Tesla informed very early adopters, that is Roadster reservation holders, of their progress and explaining what they mean with the term “slow ramp”. Back then this was to say that they  had a delay in what seems a very low production rate in any case from today’s perspective. The delay in 2008 was even “more slowly than our planned pace of 1 car per week.”

Added Tesla: “After an initial period of slow production rates (see above), the pace of production starts to pick up until we are producing in excess of 100 cars per month by November (2008). For this reason, the delivery of the approximately 600 MY2008 cars is weighted toward the end of this year and beginning of next year.”

Compare those humble beginnings to the latest target in which Tesla aims to churn out 5,000 Model 3 a week and one wonders where they will be in 2028. Keep on rolling and happy anniversary, Roadster!