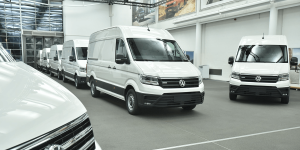 Volkswagen’s utility vehicle division will offer an electrified variant for each model in the future. Brand chief Eckhard Scholz told media to “expect a lot” over the next few years and also commented on Deutsche Post/ DHL’s StreetScooter van.

Germany’s postal service has advanced to the country’s largest electric vehicle producer with the StreetScooter after established carmakers had not returned their calls for an electric delivery van.

Times are changing and Scholz said he would see the StreetScooter as an “incentive” for Volkswagen’s own efforts. While he would not go into detail, VW Utility Vehicles is currently running trials with the e-Crafter at selected clients in Europe. The commercial roll-out is expected this September (we reported).

Regarding the announced electrification of Volkswagen’s other utility vehicles, Scholz admitted that it is always a compromise to electrify an existing model like an afterthought. Yet, he said that especially in the market for lighter commercial vehicles, an electric drive that lasts for about 150 kilometres would be ideal. At the same time, Scholz believes that it will be impossible to replace diesel or petrol fuelled vehicles entirely, at least within the next ten years.

Volvo to reveal electric semi truck at IFAT in Munich