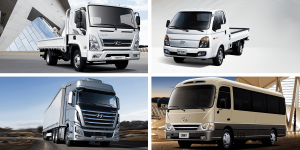 Hyundai wants to speed up the electrification of its commercial vehicle segment. Both the van Porter as well as the small truck Mighty will get an electric option as soon as next year with Hyundai to adapt technology from the Kona EV.

Hyundai could be seen accelerating its advances in plug-in vehicles lately as the Korean corporation earmarked  17.6 bn euros for development over the next five years reportedly. This latest push however, first builds on existing technology and will apply to all commercial vehicles, vans, heavy trucks and buses alike.

Business Korea quotes Mike Ziegler, director of commercial vehicle research and development (R&D) at Hyundai: “The biggest strength of the commercial vehicle division of the Hyundai Motor Group is to generate synergies with the group’s passenger car division. We will expand eco-friendly lineups from the small truck Porter to the big truck Xient.”

Therefore, Hyundai will utilise technology from the new Kona, namely the electric drive. In the Porter van and Mighty truck however, batteries with 256 kWh will be placed. They will give the electric utility vehicles a range of 250 – 300 kilometres, estimates Ziegler, who has worked for Daimler Trucks previously.

Furthermore, Hyundai wants to launch an electric version of its County bus by 2020. By 2022, the heavy truck Xcient will also run with zero emissions, most likely on hydrogen.