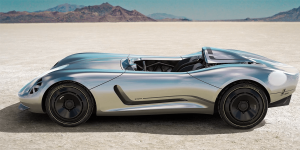 The Californian firm Hackrod is cooperating with Siemens to produce an electric sports car from a 3D printer. The design, which was produced in-house, has now been presented as an electric concept car called La Bandita.

The concept was built around the idea to be able to simply print a car in future, utilizing artificial intelligence and virtual reality to perfect the modeling. Hackrod is attempting to create a new manufacturing paradigm. Siemens Digital Innovation Platform is set to be used to help them achieve a breakthrough in doing so.

This is not the first instance of a company designing a car to be 3D printed – the Italian startup XEV, the South Korean firm KLIO Design and Italian Volt from Milan have also experimented with the concept.