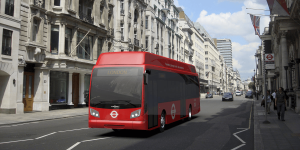 The British government has setup a pot worth 48 million pounds to help England and Wales buy greener buses. Local authorities and operators will be ask to bid for their share of the fund to buy low-emission buses and charging infrastructure.

The government hopes the 48 millions will help to put a couple of hundred hybrid and electric buses on the road in the southern half of the island. The Ultra-Low Emission Bus Scheme for England and Wales is run through the Department for Transport (DfT).

The DfT said the new scheme follows the success of the previous Low Emission Bus Scheme, which saw 13 organisations receiving more than £30m between them, buying about 300 buses. The cash is part of a wider £100m scheme announced in November 2016 to support low-emission buses.

Conservative transport minister Nusrat Ghani said: “We are doing more than ever before to reduce greenhouse gas pollution across all modes of transport and we are committed to ensuring nearly all cars and vans are emissions-free at their tailpipes by 2050.”

While he calls this target ambitious – the UK wants to ban sales of ICE cars by 2040 – a recent report by four government agencies said the Tories’ plans to ban the sale of conventional petrol and diesel cars by 2040 as “lacking sufficient ambition,” and called the state of the air over the British Isles a “national health emergency.”

Still in October last year, the government in Westminster announced to spend 2.5bn pounds until 2021 to meet its climate targets, fixed in its  so-called Clean Growth Strategy, which details government spending between 2015 and 2021. In its update, the government also confirmed once more the aim to ban combustion-powered cars by 2040.