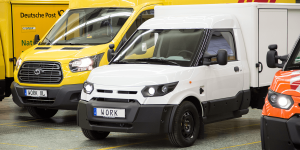 Deutsche Post/DHL and Ford are expanding their cooperation in order to be able to offer the electric StreetScooter vans more widely. The larger versions can now be ordered at selected Ford Transit dealerships.

This intensification of DHL and Ford’s cooperation means that the StreetScooter Work and Work L have become available to third parties at over 80 Ford outlets across Germany.

The decision to offer their in-house electric vans to other companies had first been announced last year when Deutsche Post DHL and Ford officially launched the StreetScooter Work XL. The latter is exclusive to the DHL fleet for now though. With Deutsche Post DHL aiming to add at least 2,500 EVs or more this year, Ford and StreetScooter will become the largest manufacturer of electric medium-duty delivery vehicles in Europe.

However, Deutsche Post/ DHL may even go further. The weekend’s wire transmitted rumours of floating the StreetScooter business publicly in order to collect 1 billion euros for further expansion.

Just a few days earlier, they also announced the founding of a new business unit tasked with StreetScooter marketing, among other things. Heading the new unit is Jürgen Gerdes, who was also responsible for the StreetScooter so far. In a 2017 interview with our German mothership electrive.net, he said that “electric mobility just makes our business better.”

StreetScooter is reportedly working on completing a second factory to build more StreetScooter vans. Located in the German town of Düren close to Aachen and Cologne, it will help to reach the planned annual production capacity of 20,000 electric vans. Half of them will be reserved for sale to third parties.