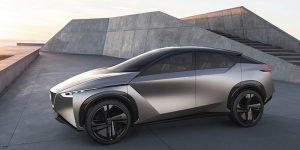 Nissan has announced a new vehicle for the upcoming Beijing Auto Show; the EV will be produced in a joint venture with Dongfeng and is designated for the Chinese market.

Further details about the new car have not been released yet, at least not before the car show. The Beijing Auto Show will also host the new Nissan Leaf, as well as the electric concept IMx by Nissan, which was presented in Tokyo last October.

China is without a doubt an attractive market for Nissan. The Japanese car manufacturer announced in February, that they planned to invest approximately 7.6 billion euros in the region over the next five years along with their Partner Dongfeng. A large portion of the investment is earmarked for e-mobility. In particular, more than 20 electrified car models (both battery-electric, as well as with the e-Power Range-Extender) are planned, with 6 rolling out by the end of next year, under the brand of Nissan, Venucia and Dongfeng. One of these 6 will now be revealed in Beijing.

Nissan announced another joint venture with their alliance partner Renault to combine with Dongfeng last October. There had also been rumors of a complete fusion of the two European car manufacturers, who have been closely affiliated as of late. The newly minted eGT New Energy Automotive is now owned at 25% each Nissan and Renault, and the other 50% by Dongfeng. The first cooperative car will be a small electric SUV, which will be produced in the Dongfeng factory in Shiyan as of 2019. The factory is set up for an annual capacity of 120,000 vehicles.