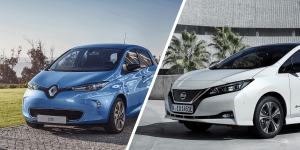 The already closely cooperating car manufacturers Renault and Nissan are considering merging their companies entirely. The goal would be to establish one large entity, capable of defining future industry developments such as electric and shared mobility.

The move to merge Renault and Nissan into one corporation is being discussed under the circumstances of the industry turning electric as well as the growing importance of share mobility offer. Bloomberg cites sources who are involved with the decision, but do not want to be named. Carlos Ghosn is the motor behind the idea and would run the new company.

Renault and Nissan have been cooperating since 1999, and more recently have added Mitsubishi, forming a manufacturing alliance, which will be releasing 12 new electrified vehicles by 2022, as well as working on solid-state batteries.

Rumours regarding a possible fusion have been circulating for a while. The two companies are currently already intimately involved with one-another, which also entails ownership: Renault owns about 43% of Nissan, while the Japanese car manufacturer owns 15% of Renault. Last year they sold about 10.6 million vehicles together with Mitsubishi, which is only slightly less than the leader of the global car industry; Volkswagen with 10.7 million.

The idea to size up and to fully seize resulting synergies is mot entirely new. However, both the governments of France and Japan had a word to say as they would like to keep their national industry champions intact. The French state holds a 15 percent share in Renault. Thus the parties are discussing a in which shareholders of each company would get shares of the other in return. Headquarters in both Japan and France would be maintained.

Regardless of how the negotiations go, thanks to the 6 year development deal between the three car manufacturers, they will certainly be playing in the top league. The declared goal is to cooperate using shared platforms and components for the vehicles planned for 2022. The focus of the alliance also extends to battery development, where they plan to find a way to reduce costs; around 30% by 2022, to be exact. In the same time-frame, the trio is also planning to develop nothing less than 40 vehicles with various degrees of autonomy.