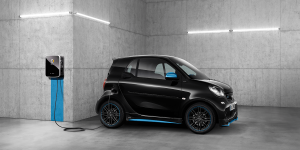 Daimler and Hubject have successfully completed the pilot test phase for their project Plug&Charge with charging station operator Ebee Smart Technologies. The new Smart EQ is also Daimlers first car that already is capable of using the system.

The charging solution Plug&Charge is the first instance of the international ISO-Standard 15118 coming into use, which allows for automated data exchange between the vehicle and the charging infrastructure, based on digital certificates. This would allow a vehicle to charge without an app or other direct payment method.

“Together with Daimler, we are drawing closer to our vision: simple charging and payment for electric vehicles for everybody. Everywhere.”, said Hubject CEO Christian Hahn.

The ISO 15118 based system works as follows: Once the connection is established between the vehicle and the charger, the authorization data of the driver is exchanged in encrypted form and compared. After successful identifying yourself, the charging process begins automatically, as well as the billing process at regular intervals. “Plug&Charge via ISO 15118 thus enables secure authentication and authorization of a charging process for the first time, also available offline, where all that is required is to plug in the charging cable.”, was further stated by the manufacturers.

The system is apparently ready for serial production, according to its manufacturers, but currently there is only one vehicle on the market that is capable of actually using the technology: The new Smart EQ.

Next to the Hubject group, to which Daimler belongs since 2012, the Berlin-based company also stated that their ISO 15118 system is globally open to all market participants to use.