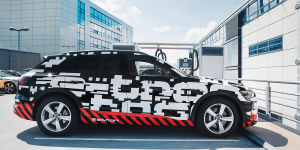 Audi has released new infos on the e-tron, their first all-electric model that is due later this year for a rather exclusive price of 80,000 euros. The latest data reveals the full scope of their e-tron, which is to precede an entire eco system of electric transport high power charged by Audi.

First for the power pack of which Audi says, the e-tron’s 95 kWh last for a range of over 400 kilometres when tested according to the WLTP driving cycle. More impressive is its ultra-fast charging capability – in fact the electric Audi is the Ionity’s network main driver for now. If all goes to plan, Audi reckons that by the end of 2018, there will be nearly 200 HPC stations with six charging points each and plans call for 400 locations at intervals of 120 kilometers along highways and main transport routes of Europe by 2020.

Apart from high power charging with 150 kW via CCS, the Audi e-tron can also take a much slower 11 kW at AC charge stops. This power may be doubled with the optional on-board charger, the so-called connect system, that boost the current to 22 kW.

From a customer’s point of view, Audi wants to make charging as easy as possible by offering e-tron drivers a charge card that is to allow access to about 80 percent of public charging stations and Audi reckons their number to be around 65,000 in Europe by the end of 2018. Contracting is to be done via the myAudi portal so that one charge card suffices for payment.

From 2019, even the single card will become redundant as Audi wants to enable the Plug & Charge feature for the e-tron, meaning the electric car authorises the station to charge automatically.

Furthermore, the home charging system comes equipped with smart charging capability controlled via the app to avoid overloading the home system. For example, the home energy management system allows to take energy prices into account as well as a photovoltaic system if the building has one. For this, Audi is working with SMA, a solar system provider and Hager.

The Audi app then also allows to monitor the charging and pre-heating or cooling of the electric SUV. This means EV drivers can set a departure time, so that the Audi e-tron is charged and/or heated/cooled at the desired time.

Audi has started taking deposits for the e-tron across Europe (we reported).