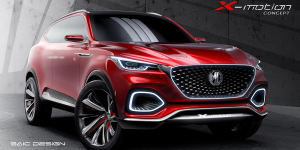 The British MG Motor that is owned by SAIC has presented their MG X-motion concept, designed for electrification. The SUV concept follows a similar design philosophy as their electric sport coupe MG E-motion, which MG Motor put on display a year ago.

While the MG X-motion shares a few design features with the older vehicle, the new car is almost certainly the SUV that MG Motor has been planning for some time now. The other vehicles in the projected lineup of four include the compact MG3, the sedan MG6 and a mini SUV, which will all be offered as fully electric versions as well as with a plug-in hybrid outfit.

Technical details have not been mentioned yet, and a market launch has also not been announced. There is a possibility that the vehicle will first launch exclusively in China. It has not been decided yet whether the vehicle will be offered in the UK, among other considered locations.