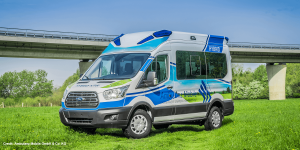 Engineers from the Otto-von-Guericke university in Magdeburg in cooperation with the ambulance specialist Ambulanz Mobile have developed the first ambulance running on a hybrid system. A prototype was presented at the RETTmobil fair in Fulda.

The axle-mounted hybrid system of the ambulance combines a diesel motor in the front with an electric motor mounted on the rear axles and a 24 kWh battery. The electric motor has a 60 kW performance and can accelerate the ambulance to 90 km/h. The maximum electric range is at 70 km, according to the manufacturers.

The university in Magdeburg and Ambulanz Mobile are a team of science and economy combining their knowledge, which is part of a project to improve mobility concepts by the European Union and the state of Saxony-Anhalt. The project will not end here either, as Hans-Jürgen Schwarz, CEO of Ambulanz Mobile has announced intentions to serially produce the ambulance.

Schwarz states that the lack of hybrid vehicles in the ambulance sector needs to be addressed, in order to enable emissions free ambulance transport both of short and long distances. The head of the research team from Magdeburg, Gerd Wagenhaus, stated that there had been a special challenge as axle-integrated hybrid were rare, and the adaptation of the eDrive module had not been easy, but that a setup had been established that fits well, as well as is compatible for clinical transports, as well as over-land journeys.