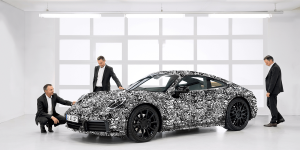 For the 2019 model of the Porsche sport classic 911, the German company is planning some major additions: not one, but two separate hybrid versions of the racer will be available.

The basic version of the PHEV will take over the motor from the recently presented Cayenne E-hybrid. But, unlike previous Porsche models, the Porsche will offer a regular E-hybrid as well as a Turbo S E-hybrid variant with improved performance.

The first impression of the new 911 was given in February. At this point, the lead director August Achleitener hat not excluded electrification. To avoid potential misconceptions: The new Porsche 911, type 992, will not be offered as a battery-electric vehicle. While the option may be taken advantage of in future, the step towards alternative energy sources is only slowly gaining momentum at Porsche.