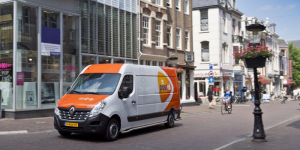 Renault has begun with the delivery of the Master Z.E. in Europe. The first two vehicles were delivered to the Dutch mail service, who will integrate a total of 17 Renault Master Z.E. into their fleet by end of the year.

The postal company named PostNL has stated the goal to deliver exclusively using electrified transport by 2025 in 25 Dutch city centers. The first cities will be Utrecht and Leeuwarden, where the first two Master Z.E. will find their homes.

As of February, details regarding the market launch in other European countries have been announced: In Germany, the electric transporter will be sold at a starting price of 59,900 euro netto, including the battery. It will be a box car of the L1H1 variant. In France, the battery has to be rented separately. In general, six variants of the vehicle will be offered, for different sizes and purposes, with a load volume ranging between 8 and 13 cubic meters.

The technical basis for the BEV is the Renault Master, which features a combustion engine and front-wheel drive in the class from 2.8 to 4.5 tonnes. The drivetrain is taken from the Kangoo Z.E, as is the 33 kWh lithium-ion battery. The vehicle is powered by a 57 kW electric motor with a 225 Nm torque. A top speed of 100 km/h was also named for the transporter, which should easily be sufficient for urban areas. According to NEFZ, the range is set at up to 200 km, however Renault has stated that closer to 120 km is probably more realistic.

High speed charging is unfortunately not possible with the vehicle. The battery itself can be charged with a type 2 charger up to 7.4 Kw, with a maximum charging time around 6 hours. Ideally, the transporter will be charged at night, before resuming daytime use.