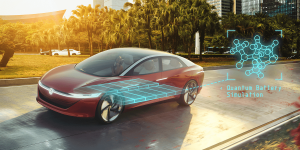 The research cooperation between the two companies in the area of quantum computers is showing its first results. VW announced that they had first succeeded in simulating the structure of industry-relevant molecules on a quantum computer.

The simulation is relevant for the development of more powerful batteries, particularly in the area of EV batteries. Long term, the partners plan to be able to simulate the entire chemical process of a whole battery on a quantum computer. The goal is to develop a “tailor-made” battery; a configurable blueprint ready for production. The simulation requires particularly powerful computing.

Florian Neukart, the principle scientist at Volkswagen’s CODE Lab in San Francisco, stated: “We are working hard to develop the potential of quantum computers for Volkswagen. The simulation of electrochemical materials is an important project in this context. In this field, we are performing genuine pioneering work.” He added that he believes that the market will quickly catch up in developing more powerful computers, “open[ing] up previously unimaginable opportunities.”

Using Google’s quantum computer as well is Daimler reportedly. The cooperation agreement allows specialist teams from Daimler Group Research and IT to use quantum computers built by Google. Daimler want to apply such processing power to find new materials based on quantum chemistry, e.g. for the development of battery cells as well. Another use case is logistic and fleet management and advanced artificial intelligence.

CATL catapulted to be worth billions on stock exchange