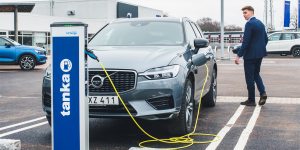 Vattenfall is expanding its electric car charging network InCharge in its home country. A new deal with Volvo and Renault includes the installation of 300 charging stations at dealerships next to Tanka pit stops in Sweden and Vattenfall says construction works have begun already.

The InCharge network relies on partners to install the charging stations, not unlike the Ionity business model. Vattenfall now won over Renault and Volvo dealers and the new stations rely on the Tanka gas station network that is a subsidiary to Volvo and Renault in Sweden.

The 300 planned Vattenfall charging stations charge at a mere 22 kW. The installation has begun and the first few charging stations have gone live in Halmstad, Vetlanda and Lidköping. Payment can be made via the InCharge application, which is connected to Volvokortet and CarPay, the Volvo dealers’ own payment solutions.

All 165 selected dealerships are adjacent to Tanka’s gasoline stations. As a wholly-owned subsidiary to Swedish Volvo and Renault dealers, it forms an existing network, Vattenfall can tap into. Says Susanna Hurtig, Head of Vattenfall E-mobility in the Nordics: “The initiative from Tanka i Sverige AB is spot on with drivers’ wishes and harmonises with the developments we can see among the car manufacturers. We are immensely proud of this cooperation,” and Vattenfall estimates there are almost 60,000 electric cars in Sweden now.

Vattenfall currently operates 9,000 charging points in Sweden, the Netherlands and Germany. The InCharge charging network was launched in Sweden in November 2016 and the utility is on course for expansion. Only this month, Vattenfall launched InCharge in Great Britain but disclosed no details as the search for partners on the Isles is ongoing (we reported).

Only in Sweden, Vattenfall offers a home charging solution together with Volvo. The ‘InCharge Smart Home’ solution is part of the InCharge charging network.