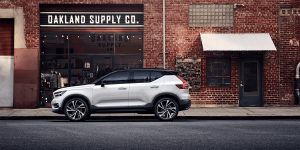 Volvo is preparing for the launch of the electrified XC40 series and has narrowed down on price. The all-electric XC40 will cost about 50,000 dollars according to Volvo CEO Håkan Samuelsson. He also affirmed Volvo’s intention to be profitable “from day one” at a media event.

The next-gen XC40 is in line with Volvo’s plan to electrify their entire model range. Expect the PHEV version later this year. Not much has been said about the all-electric XC40 but it utilises the new CMA platform. Release is scheduled for early 2020.

If the 50,000 dollar price tag stands, it would make the electric Volvo SUV a pretty competitive choice in the segment. The Jaguar I-Pace starts at 69,500 dollars for example.

Still for Volvo to sell off the XC40 Electric with a profit surely means they expect volume, not unlike Tesla. Their Model 3 had been shown profitable in a recent analysis, proving sceptics deeming electric cars a loss wrong.