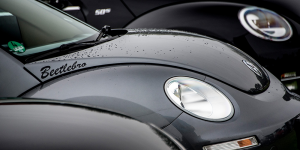 With electrification taking up speed at Volkswagen, their designers are becoming more open-minded. Take the head of design himself, Klaus Bischoff who said he keeps a sketch of an all-electric Beetle under his desk that could make the little icon a tad more exciting.

All electric cars of Volkswagen hinge on the MEB platform, foremost the I.D. series. So to adapt a Beetrle to the platform is literally a bit of a stretch but one that Volkswagen prepares to take – maybe.

Volkswagen chief designer Klaus Bischoff told Autocar, VW first has “to get the volume [ID] models under way,” before they could move into what he calls “more exotic cars and the field of emotion”.

When asked if they were considering electrifying the Beetle, just as they plan to do with the I.D. Buzz, Bischoff turned the shortcomings of the MEB platform into an advantage. He explains: “If you look at MEB, the shortest wheelbase [possible] is the ID [hatchback]. If you took that and did the Beetle on it, you have plenty of room so there’s no compromise in functionality any more. So it could be a very attractive car.”

Autocar reports Bischoff saying he had already made a sketch of such a four door Beetle on the MEB platform but he also said it would be two or three years before a decision to approve such an electric car for production would be taken. It is not unlikely though, given that Herbert Diess mentioned such a possibility already back in November 2017 reportedly.

Whenever such an all-electric Beetle makes it into the series, it will have the added benefit of boasting a rear-wheel drive just like the original Beetle. It would also position Volkswagen in line with other small icons that are becoming electrified, such as the Mini Cooper and the entire Smart range as well as newcomers such as the Uniti small electric car from Sweden.