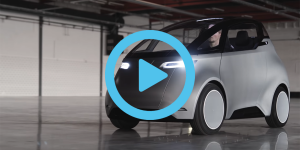 Swedish startup Uniti that is backed by the likes of Siemens, Kuka or BorgWarner presents a working prototype of their Uniti One for the first time. A video sees them cruising the shop floor and the details of their compact electric car look neat to say the least.

Uniti has set out on a concept, that is a utilitarian product, as in urban, compact, electric and affordable. Moreover, their Uniti One has been put together through a crowdfunding effort and the 1 million euros collected appear to have been put to good use.

They just released a video that serves as proof of concept so to speak. And right in time, given that launch and first deliveries are scheduled for next year. The Uniti One has a 22 kWh battery for a range of 300 km. What is likely to be their strongest USP is the price. Starting at 19,900 euros, Uniti is also thinking to offer even cheaper versions from 14,900 euros.

Uniti wants to produce their electric car in Swedish Landskrona. Deposits are being collected as we speak and also they are planning models with more seats. Their timeline is ambitious though, particularly when thinking about expansion at the same time. Uniti recently made a deal with the Indian Bird Group in order to enter the Indian EV market.

Whilst the Bird Group will take care os assembly in India, in Europe Uniti got a potent partner on board early on. Siemens plans to set up a largely automated factory and plans for 50,000 LEV rolling off the lines and to be delivered by 2019. Siemens has invested 3m euros in the electric car startup to date.