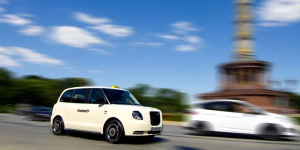 A bit of Britain has come to Germany today as LEVC launches their range extended cab in the country. The TX will cost just short of 60,000 euros and LEVC chairman Carl-Peter Forster believes the taxi will soon make it on “many significant markets” worldwide.

In Germany, LEVC found a first client in a north German taxi operator that should spread the TX right across the country. A launch event saw the Geely-owned LEVC run a ride-and-drive event at the British embassy in Berlin.

The initial deal includes the early delivery of a batch of 25 vehicles. Another 200 are on order and to be delivered at a rate of about 25 per month.

Different from their British “black” cab counterparts, the German taxis all feature a left-hand drive and a panic button as per German taxi regulations. They come in a variety of colours although the dominant colour will be beige as it designates taxis in the country.

But seen from the perspective of German taxis, mostly Mercedes sedans, the differences are even more striking. Start with the room inside the cabin that easily fits a wheel chair. Another novelty is the glass window separating driver and passenger.

LEVC will hook on to Volvo’s dealer network to deliver the TX. The cooperation builds on their common owner Geely naturally and the TX owes much to the range extender technology made by Volvo.

The electric cabs built in Coventry are also running in Scandinavia since LEVC signed an agreement with Fortnum reportedly. Moreover, LEVC say they have interest from taxi operators in France and the Netherlands. Eventually LEVC wants to sell as far and wide as Asia and the Middle East. They plan to earmark least 50% of LEVC’s taxi production for export. The company has also launched their second model, an electric van for inner city logistics (we reported).

At the embassy event chairman Foster also expressed his “deep concern” over any Brexit deal potentially affecting trade between Britain and mainland Europe.