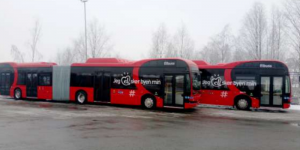 BYD will deliver the largest fleet of electric articulated buses in Europe to Oslo. Two orders have been placed by Nobina for a total of 42 electric buses measuring a full 18 metres. The orders follows multiple electric bus deliveries to Norway.

The 42 electric buses by BYD come equipped with pantograph charging and are scheduled for delivery in the second quarter of 2019.

Once they arrive, Nobina will run a fleet of 44 electric articulated buses in total that may be the largest of its kind in Europe. The new ebuses will service routes in the Oslo area and in particular in the east of Norway’s capital.

They will be anything but alone though. Only this May, Unibuss ordered 40 electric buses from VDL reportedly. They join an order from Norgebuss, another Oslo bus operator that expects Volvo to deliver 17 all-electric buses (we reported).

Add to this the above order from BYD and we count 99 electric buses due to arrive in Oslo. This is more than the 70 units an earlier report suggested.

It would make sense though to stock up as Oslo will be the Green Capital of Europe in 2019. Their planned electric bus project will cost around 88 million euros over the next ten years, when Norway’s capital aims to run a zero emission public transport system.