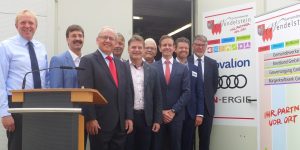 Audi has joined the ranks of carmakers finding new uses for old electric car batteries as energy storage. The station has been set up close to Nuremberg in the south of Germany. Capturing 1,000 kWh, the second-life installation is run by local utilities.

The stationary energy storage had been in the making over months with partners Wendelstein Bürgerkraftwerk GmbH, a community-owned utility belonging to the N‑ERGIE Regenerativ GmbH, and energy specialist Covalion having turned to Audi.

The carmaker supplied 84 batteries that had served their time in the first life. Combined these batteries can still store 1,000 kWh, enough to supply about a hundred households in the region. Mostly though, the stationary energy storage will serve to even out electricity supply at peak times in order to stabilise the grid, keeping it at a constant 50 Hertz.

According to the utilities, their set-up will last for 20 years. For Audi’s Reiner Mangold, who oversees the area of sustainable product development, the project in the town of Wendelstein is a “real-life use case” and will help Audi to go deeper into battery recycling and second-life applications.

Audi is not alone in their endeavour. While EV powerhouses such as BYD or Tesla consider themselves energy companies already, carmakers are increasingly seeking collaborators. In the case of Daimler, they opted for a compromise as they set up a subsidiary called Mercedes-Benz Energy. It has turned a coal power plant into an energy storage holding close to 2,000 electric car batteries for a combined capacity of near 10 MWh available to the energy market. However, the latest coupling of BMW and EVgo saw the latter equip one of their fast-charging station with a back-up made from reused batteries from the BMW i3. For now said stationary set-up is a standalone but EVgo say they are planning to expand such second-life applications in future.