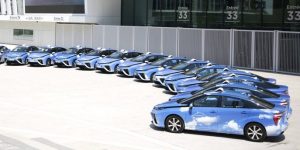 The fleet has been active in the French capital since 2015, based on a cooperation between STEP and the company Air Liquide. The project is additionally funded by the EU project ZEFER (Zero Emission Fleet Vehicles for European Roll-out). The project is designed to explore advantages presented by FCEVs over other NEVs, particularly over long distances, where fast fueling processes in urban centers would be required.

The ZEFER project has placed 60 FCEVs in three European capitals, each; London, Paris and Brussels. In London, the taxi company Green Tomato received the first 25 vehicles in early May.

The project is being financed by a 26 million euro subsidy from the EU, and another 5 million euros from the European H2 initiative Fuel Cells and Hydrogen Joint Undertaking. The project aims to collect data and set up a business model for fuel cell vehicle fleets in Europe. The consortium behind the project is being led by Element Energy, who is being supported by Air Liquide and ITM Power Trading, Green Tomato Cars, HYPE and the London Mayor’s Office for Policing and Crime, as well as BMW, Linde AG, Cenex and the city council of Paris.