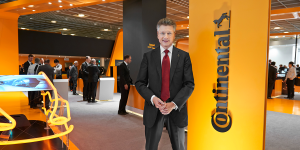 The company does not want to wait for the technology becomes available before getting involved, but has announced intentions to bring the technology forward on their own terms. CEO Elmar Degenhart stated during an interview that the company is looking for potential cooperation partners  who can bring in development competencies, while Continental is looking to contribute more on the industrialization side of things. Another interesting comment he made regarding their targets is that he expects battery cells to reach 1,000 watt-hours per litre in order to be competitive. Current lithium-ion batteries have about 300. He calculated an investment cost of round 3 billion dollars, which will help build a cell factory capable of producing 40 GWh. The decision was made following a calculation regarding future component requirements for EVs: If 70% of new cars produced in 2050 are battery-electric, it would require about 160 of such factories to supply the global market. He expects a major boost to happen in 2025 to 2030, and feels secure that the company will be prepared for the incoming market shift.

Recently, Continental also announced some major corporate restructuring to make the company more competitive for the future: The company was split into three modular section: Rubber, Automotive and Powertrain. The Powertrain section will be self-sufficient and more independent than the other two sections, starting early next year. The sector will cover all current combustion business, as well as hybrid and electric motors, as well as all ongoing battery developments. That includes the recently announced JV with the Chinese battery cell manufacturer CITC for 48-volt battery systems.

The head of the new Powertrain section will be Andreas Wolf. A partial opening for investment is also planned for the sector, and will commence next year. The company plans to retain control over the Powertrain business in the medium and long term, according to a statement. By using a more autonomous structure, the company hopes to be more adaptable and quick to react to different politically mandated emissions standards.