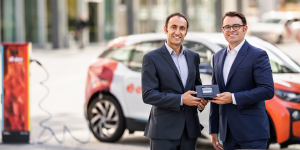 Utility E.ON has announced to begin equipping their charging stations in accordance with the German Weights and Measures Law (Eichrecht). The solution called SAM has been developed by EBG compleo and enables E.ON to accurately calculate the price of charging both per minute and kWh.

Already back in March this year, E.ON had introduced fixed tariffs across its entire network of about 4,000 charging points in Germany. The new SAM technology now enables the utility to open their charging stations for roaming while complying with German law.

The module by EBG compleo is part of all new AC charging stations of E.ON. They will also retrofit existing charge columns bit by bit. Moreover, E.ON and EBG are working on a solution to integrate SAM in DC charging stations as well.

There are currently three AC charging systems on the market that conform to the German calibration law. In addition to EBG compleo, the Dutch manufacturer Ecotap also received approval in July. Innogy too has been certified according to the German Weights and Measures Law since 2014. At that time, it was the first type approval of its kind and is still valid for an unlimited period for the combination of Innogy backend and charging columns.