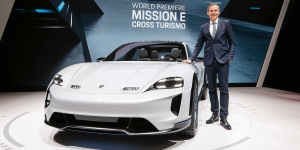 The EV offensive by Porsche will cost the German automobile manufacturer billions, without a quick return on investment. For this reason, CEO Oliver Blume has announced a plan to save/make back several billion over the next three years.

The exact sum to be saved is 6 billion euros, according to the plan. The plan is to employ process optimization techniques as well as add new digital business models to help balance the expected deficit before the EV strategy fully takes hold.

The six billion euro figure is not random: This is the exact sum Porsche also plans on investing in their EV strategy. Two weeks ago, Blume announced that his vision for Porsche includes every second vehicle sold by 2025 being electrified. The fully electric Taycan will hit the market towards the end of 2019, taking up 500 million euro in development costs for variants and derivatives alone. Another billion have been calculated for the electrification of existing models as well.

In order to balance the books, Porsche is making efforts to save or bring in some cash on the other side. Particularly increasing efficiency in product development and manufacturing, as well as lowering material costs will save the German company the money, rather than letting go of employees, according to their statements.

In the first half of 2018, Porsche booked a turnover of 12.3 billion euros, which is a plus of four percent compared to the previous year. The operative income was lower, rising only 1% to 2.2 billion euro.

Tesla gearing up to bring Model 3 to Australia, NZ