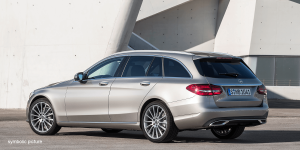 Ahead of the debut at the Geneva Motor Show, Mercedes has released pictures showing the facelifted C-Class that will be on display with two plug-in hybrid variants. Daimler also announces a serial EQC model and a new edition Smart EV for the Swiss salon.

Mercedes says its new C-Class has got a “stylish makeover” of both the interior and exterior and also hosts a range of automated driving features. In Geneva, Daimler will show the saloon and estate body styles, with coupé and cabriolet versions to follow at the New York motor show in April.

Apart from petrol and even diesel engines, mild hybrids as well as PHEVs are to join the motor line-up. The current C350e will be replaced with C400 EQ Power and the PHEVs electric part will deliver 90 rather than 60 kW. Additionally, the C-series will include a diesel-hybrid called C400d EQ Power with an electric range of 50 kilometres (we reported).

Furthermore, expect to see an all-electric model under the EQ label, that is like to be the series version of the EQC. The electric SUV is set for launch next year.

And then there is the electric Smart as Edition Nightsky about which Mercedes says that Smart “is showing the next step towards electrical intelligence.” An app shall enable drivers to check their state-of-charge for example and it shall be live from the third quarter of 2018. A new 22 kW onboard charger will become available already this March though.

Opel to launch electric Corsa made in Spain