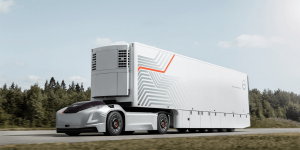 The self-driving truck without a drivers’ cabin was presented at the Volvo Innovation Summit in Berlin. It shares the same electric motor and battery packet with other electric Volvo trucks. The autonomous driving capacity is provided by networking with a cloud-server, which provides Vera with real-time updates, in combination with a central control centre.

Vice president of autonomous solutions at Volvo, Mikael Karlsson, said: “Our system can be seen as an extension of the advanced logistics solutions that many industries already apply today. Since we use autonomous vehicles with no exhaust emissions and low noise, their operation can take place at any time of day or night. The solution utilises existing road infrastructure and load carriers, making it easier to recoup costs and allowing for integration with existing operations.”

Vera is initially designed to perform routine transports with a high degree of repetition, but Volvo included room for potential growth to be adapted for further uses in future. To begin, Volvo Trucks plans to test and develop the vehicle with select partners.

At the Berlin summit, Volvo also presented another concept: The LX2 is an electrified construction concept, which will be used on the construction site of the future. The compact forklift is a prototype of the second generation, and part of a corresponding project between Volvo CE and Skanska.