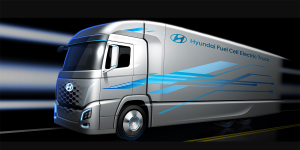 Hyundai has presented a new fuel cell truck named the Fuel Cell Electric Truck in Hannover, and has announced a cooperation with the Swiss hydrogen provider H2 Energy to begin next year. Over the next five years, the two will create a fleet of 1,000 vehicles, as well as bring them to market.

Hyundai has already addressed the personal vehicle market with their fuel cell vehicles ix35 Fuel Cell from 2013, and the Nexo from last year, so now the South Korean manufacturers engineers are setting their sights on the utility vehicle market.

The result is the Fuel Cell Electric Truck with eight integrated hydrogen tanks and a 400 km range. The 18 tonne vehicle (34 tonnes with the trailer attached) can hold approximately 33 kg of hydrogen in its tanks, and uses an electric motor with a peak performance of 350 kW and max. torque of 3,400 Nm.

The Swiss company H2E, which is generally specialized on the production and delivery of renewable hydrogen in Germany, Norway and Austria, will begin marketing a fleet of the trucks in the coming year. The plan is to start with their Swiss customers, particularly members of the Swiss H2 Association, which is an organization combining several gas station operators, retailers and other customers from the field of hydrogen. The corresponding agreement was signed at the IAA Commercial Vehicles.

Cheol Lee, Hyundai’s head of the utility vehicle division, views the agreement as an important step to commercialize fuel cell trucks, going as far as stating: “We are yet again advancing the field of fuel cell technology in the automotive industry with today’s announcement of our ambition to commercialize the fuel cell electric truck for the first time in the world”. Hyundai will continue to look for opportunities to expand their fuel cell business in the future. During the Winter Olympic Games earlier this year in Pyeongchang, the company provided fuel cell buses, for example. Currently, they are also testing pilot programmes in South Korea’s major cities.

Daimler and BMW’s carsharing to be based in Berlin