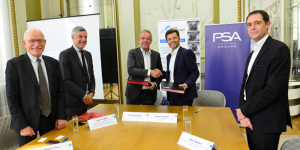 The planned joint venture between the French PSA company and the Belgian powertrain manufacturer Punch Powertrain will be named Punch Powertrain PSA e-transmissions, and will be based at the PSA factory in Metz.

As of 2022, the two partners plan to manufacture up to 600,000 electrified powertrains of the e-DCT type with a 48 volt configuration, which were previously developed in the Punch Powertrain R&D centres in Belgium and the Netherlands. The powertrains were adapted to fit the requirements for PSA’s mild hybrids.

The joint venture is still awaiting official permission to go ahead from the responsible agencies. In May this year, PSA had originally announced their intentions to work together with the powertrain manufacturer belonging to the Yinyi Group, to deliver powertrains until 2022 as part of the company’s electrification initiative. This agreement deepens this industrial bond. To begin, the partners will manufacture the current electric dual clutch transmission Hybrid DT2, until the production lines are set up for the above-mentioned 48 volt transmissions. Punch Powertrains has invested heavily to be able to meet the demands of the large scale cooperation, for example by acquiring performance electronic specialist Apojee in January of this year. The company had belong to DAF and ZF before being acquired by the Chinese company. Last year, Punch produced more than a million transmissions, mainly for Asian manufacturers. PSA is largest European customer for the company.

Which models will receive the 48 volt mild hybrid technology has not been specified by PSA so far. We do know that the next generation transmissions will enable power saving of 15% and have an emissions-free driving mode for use in cities. A spokesperson from PSA Metz said that the cooperation would create 400 jobs, and that PSA would be investing 80 million euros into the joint venture. The vehicle manufacturers themselves have not commented on these numbers, however.