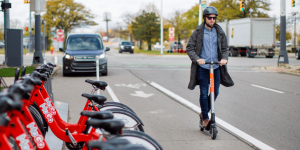 Ford has announced the takeover of Spin, a vehicle-sharing operator using electric scooters based in San Francisco. The plan is to extend the service to 100 other U.S. cities over the next 18 months.

The takeover is part of Ford’s new strategy organized by Ford Smart Mobility, a subsidiary mobility company. The goal of the 2016-founded company is the setup of a modern mobility portfolio.

In March, Spin launched in San Francisco, alongside competitor Bird. Several complaints about the sheer number of kick scooters coupled with a few accidents, forced the city to shut down the sharing services over the summer. While Spin attempted legal action, they were not able to defeat the city ruling. So far, only the competitors Scoot and Skip have received official permission from the city to operate a sharing service for small electric vehicles. Even despite such setbacks, the interest in Spin’s San Francisco network of electric scooters is high.

The takeover will cost Ford about 100 million dollars, despite Spin being valued at about 40 million dollars at the last financing round. This is also not Ford’s first foray into the electric scooter business – only recently the startup Jelly supplied 40 electric scooters to a US American university, before it was revealed that Ford had been behind the action all along.

Automobile manufacturers are becoming increasingly interested in the “last-mile” business. Recently, Daimler subsidiary Mytaxi also announced intentions of getting involved with electric scooters. They plan to launch a pilot programme before the end of the year with 200 to 500 shared electric kick scooters in a “southern European market”.