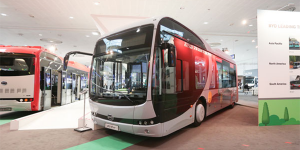 BYD has completed construction of their first batch of electric buses in their new factory in Allonne, France. The two completed electric buses will be handed over to the Transdev and operate in the community of Agglo du Beauvaisis.

One and a half years ago, the Chinese electric vehicle manufacturer decided to put their first manufacturing facility in western Europe in Allonne, in the Hauts-de-France region. BYD has initially announced plans to invest about 10 million euros into the 32,000 m² facility.

Now the first production successes have been presented, with the first 12-metre electric buses ready for use on public roads. The buses will be used to connect the Beauvais-Tillé airport with the city hall and main train station, as well as shuttle services for hotels. Both buses are said to be capable of a 160 km daily range without charging stops, and will be charged overnight at the Transdev bus depot in Beauvais.