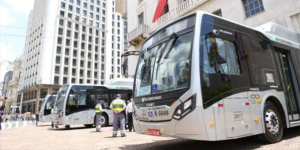 Brazil’s largest city, that is Sao Paulo, has received its first electric buses from BYD. The 15 buses are part of a pilot project involving solar power, before they will take up full service in March 2019. Meanwhile, BYD has also become active in Hungary.

But first a few more words on BYD being in Sao Paulo. The 15 electric buses of type D9W are taking part in a pilot project around sustainable energy. In this case the electricity is generated by solar panels, also made by BYD but in this case locally.

The buses in Sao Paulo can run for about 250 km each and carry up to 80 passengers. The first three that have arrived are run by Transwolff, a local transit company which operates in the south of the city.

Meanwhile, BYD has also delivered its first ever electric bus to Hungary, to the town of Salgótarján to be precise. The electric vehicle measures 12 metres and is the first for the city, and in fact the first to run in the country. The latter fact is surprising, given that BYD actually have a factory in Hungary. And yes, the bus to Salgótarján was built in BYD’s plant in Komarom, Hungary. This plant has been running since April 2017 and has delivered bus fleets to the Netherlands and Sweden, and is now producing buses for Brussels Airport Company. The factory has also started production of electric bus chassis for customers in the UK.

Another factory in Europe has only started working and BYD’s new facility in Allonne, France, now completed the first electric buses to be handed over to Transdev operating in the community of Agglo du Beauvaisis (we reported).

BYD has now confirmed sales of over 600 electric buses in twelve European countries.

California requires all new buses to be electric by 2029