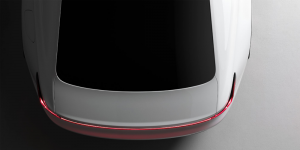 Polestar has released a first teaser photo of their first all-electric model, which is to be fully unveiled “in the coming weeks”. In addition, Volvo’s performance brand has released the first performance data of the Polestar 2.

According to the data, the electric sedan will feature around 294 kW output performance. The range is expected to be around 300 miles (about 483 kilometres). Polestar wants to offer the electric vehicle in the same price class as the Tesla Model 3.

The Polestar 2 will go into production shortly after the Polestar 1 plug-in hybrid, which will be launched in mid-2019 according to an earlier announcement. The purely electric sedan, which is based on Volvo’s new CMA platform, will come onto the market in 2020. The model could probably make its first appearance in the limelight at this year’s Geneva Motor Show.

New year, new us. Reliance on combustion engines is coming to an end. The way forward is electric. This year we go all-in with the launch of the electric Polestar 2. pic.twitter.com/maN5DF7toI

Tesla Model 3 can now be ordered in Europe