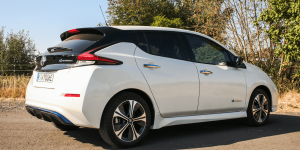 Very limited in fact, given the Leaf is Nissan’s (if not the world’s) best selling electric car with Nissan claiming to have sold over 380,000 units globally since the launch in 2010. Despite these encouraging numbers, the Japanese company have allocated Europe no more than 5,000 units this year. Sales in Japan however, will start within weeks and buyers in the U.S. may expect to get their hands on the new Leaf with the bigger battery from spring. In the U.S. it will be called the Leaf Plus series.

In detail, the more powerful Leaf is now powered by a 160 kW electric motor with a torque of 340 Nm. The top speed has increased by 10 per cent and the Japanese company estimates the car’s range at up to 385 kilometres (WLTP).

Most importantly, the new battery size has been set at a final 62 kWh. This means that the energy density has increased by 25 per cent and the storage capacity by 55 per cent compared to the 40 kWh version, translating to a 40% range increase.

Instead of 192 cells, the larger battery consists of 288 cells. Still, the size of the battery pack has remained almost the same (+5mm). The Leaf 3.Zero and Leaf 3.Zero e+ limited edition batteries have the same eight-year/160,000 km Nissan warranty that one can expect with all versions of the little Nissan EV.

For charging capacity, Nissan specifies 70 kW with 100kW peak, still via CHAdeMo. This obviously sets the electric car apart from current market trends, both in charging speeds as well as charging standard with CCS gaining ever more ground.

Moreover, our exclusive report regarding the lack of liquid cooling of the new battery has also been confirmed. The lack of such active heat dissipation had already led to the issue known as Rapidgate on social media. Back then, already the battery generation with 40 kWh exhibited problems with repeated DC charging, especially in hot climates.

Concerning the 40 kWh standard version: Nissan offers the Leaf with a smaller battery as a special model, the 3.ZERO, for 40,300 euros. This version features a new infotainment system including an 8-inch touch screen that enables additional connectivity services such as door-to-door navigation. The NissanConnect EV App has also been revised.

The Nissan Leaf model year 2019 can now be ordered from dealers. However, in addition to the new Leaf3.Zero e+ model, there have also been some changes to the basic model, which has less equipment (ZE1) and is no longer available for 31,950 euros. This new base range starts at 36,800 euros, which corresponds to the previous Leaf Acenta.

A final word on positioning: Nissan has come up with a fine proposition for mass market here, given there won’t be any issues with the battery. However, the relatively slow charge rate and long warranty is designed for a long cell life. Whether they will eventually switch to CCS for charging is another matter though. Yet, the V2G capability deserves mentioning and has reportedly been approved to officially feed the grid in Germany. Also in terms of pricing, Nissan stays well below the Tesla Model 3. The Chevy Bolt and Hyundai Kona are comparable, however, Nissan looks back at a longer tradition of selling their electric car.