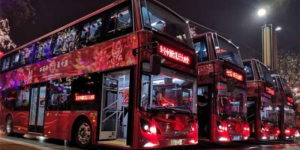 The world’s largest fully electric double-decker bus fleet is currently being launched in the Chinese city of Xi’an. The fleet consists of 200 BYD K8S double-decker buses that will serve six city bus routes. More than 3,000 of the manufacturer’s electric buses are now in service in Xi’an.

Located in the northwest of China, the city is the historical starting point of the old Silk Road and also forms an important hub in China’s current “Belt & Road” initiative. Of the 200 double-decker buses with electric drive, half have already gone into operation on lines 284, 608 and 609 on 30 January. The remaining 100 buses are scheduled to go into service shortly on lines 19, 25 and 603.

According to BYD, the K8S is already in service in the Chinese cities of Shenzhen, Guilin, Huai’an, Jingdezhen and Pingtan. The model has been on the market since the end of 2016.