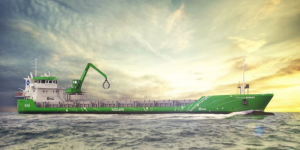 Technology group Wärtsilä announces a hybrid retrofit solution for ships.  The ‘Hagland Captain’ ferry is to be converted to hybrid-electric propulsion as part of a project with Hagland Shipping, an international firm.

According to Wärtsilä, this is the first such project in the short sea shipping sector. It is the product of a collaborative agreement between Hagland Shipping and NOAH AS, the Norwegian environment and resource company. Wärtsilä said that valuable input was given by Bellona.org, an NGO with an environment and renewable energy focus.

Wärtsilä’s battery hybrid propulsion solution will enhance the ship’s environmental performance by reducing its emissions, fuel consumption, and noise. This includes a shore power connection to provide power for loading/unloading operations and battery charging, power take-in (PTI) and power take-off (PTO) technology, as well as a Wärtsilä NOx Reducer (NOR).

Estimates put the total reduction in nitrogen oxide emissions after the retrofit at 80 to 90 per cent and overall fuel cost savings in the range of 5 to 10 per cent. The battery capacity is enough to sail in and out of the harbour on electric power for approximately 30 minutes.

Wärtsilä’s hybrid solutions are apparently based on a unique fully integrated hybrid power module that the company says is the first of its kind. A newly developed energy management system (EMS) combines engines, an energy storage system using batteries, and power electronics that are all optimized to work together.

The retrofitting of the general cargo vessel owned by Hagland Shipping will enable the company to conform to government stipulations for Norwegian waterways. The country is creating the first zero-emissions zone on water. The parliament of Norway has accepted a resolution which would see emissions banned in the world heritage fjords “as soon as technically possible and no later than 2026”. This means fjords with a world heritage designation that are mainly frequented by ferries and cruise ships can only be crossed by (partially) electric ships as of 2026.