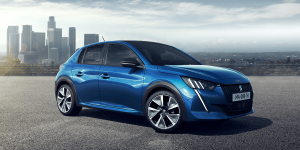 Peugeot has officially introduced the new 208, which will be available in autumn this year. Now for the first time, a purely electric drive, the e-208, will also be released at the same time and is a chance to share electrification widely across the PSA Group.

The Peugeot e-208 will be unveiled at the upcoming Geneva Motor Show in March. The electric supermini will have an output of 100 kW and a WLTP range of 340 kilometres thanks to a 50 kWh battery. It is not exactly a dragster, reaching 100 kph in 8.1 seconds. However, the little Peugeot electric car shares the system with both the DS 3 Crossback and likely the electric Corsa of Opel/Vauxhall as well.

The small Peugeot electric car is visually similar to the Peugeot 508 coupé limousine, not least because the 208 is seven centimetres longer and four centimetres lower than its predecessor. This new generation is based on the e-CMP platform developed jointly with Dongfeng, which lays the foundation for pure e-vehicles in the B and C segments. It also forms the basis for the said electric DS 3 Crossback and the future Opel Corsa with electric drive.

When it comes to charging Peugeot’s electric supermini it takes about 20 hours at a regular socket, with a Wallbox around 5 hours for the three-phase version (11 kW) or in 8 hours for mono-phase (7.4 kW). More interestingly, however, at a fast-charging point, 80% battery capacity can be charged in 30 minutes at a rate of about 100 kW. The car comes with different offerings, such as public charging via Free2Move throughout Europe, and Easy-Mobility, which simplifies route planning and vehicle rental. Also offered is Serenity, which uses digital simulations and documentation to introduce customers to the subject of electric mobility and lets them know how to optimise their drive. The guarantee for the battery is eight years or 160,000 kilometres based on 70 per cent of the charging capacity.

As far as the electric supermini’s technical abilities are concerned, Peugeot is talking about paving the way for semi-autonomous driving for the new 208 with new driver assistance systems. In addition, the next generation of Peugeot’s so-called i-Cockpit will be used for the first time in this new model.

Visually, the e-208 stands out from its combustion engine counterparts with small design elements. For example, the radiator grille bears the body colour, and the lion emblem changes colour depending on the angle of view.

Peugeot will start accepting reservations for the e-208 electric car from the end of March before the order books open in earnest in the second half of this year.