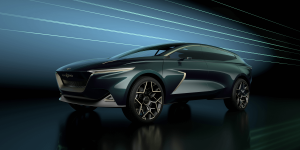 The Lagonda electric SUV takes up the design language of the Lagonda Vision concept presented a year ago. Technically, the battery is installed in the underbody of the new All-Terrain Concept, while the roof parts open upwards and the two front seats can still be rotated 180 degrees, as with the Vision concept. Lagonda explains that the focus of this latest luxury vehicle is more the driving experience and not necessarily autonomous driving.

Aston Martin’s electric car brand wants the new concept to be understood as a representative of a design language that “could be launched on the market as early as 2022 with the Lagonda series models”. While the Vision concept was inspired by the Concorde, the All-Terrain concept has adopted part of its original design language from the world of superyachts, states Aston.

The British company did not publish any technical data on the new study, unlike with their Vision concept where they at least announced that the integration of future solid-state batteries and a range of up to 400 miles (approx. 640 km) was planned.

Aston Martin’s second factory in St. Athan has given out more information. This is where Lagonda production is scheduled to start in 2022 (previously 2021 was mentioned). More than 70 Welsh employees recently joined the 100-strong team in Wales. This group of experts has the task of training new employees, says the luxury carmaker. By the first quarter of 2020, the workforce is expected to grow to over 700 employees.

The plant is currently in its third and final rebuilding phase. Production of the Aston Martin DBX should initially begin there, “but the final goal is to serve as a global competence centre for the production of high-performance luxury electric cars,” explained the British carmaker. As of autumn 2018, the Rapide E will be the first all-electric Aston Martin model to be produced there this year.