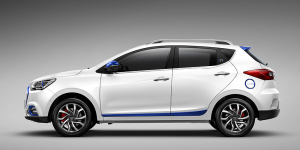 Volkswagen is reportedly considering the purchase of a large stake in their Chinese joint venture partner JAC and has engaged Goldman Sachs as consultant for this purpose. Last year, VW and JAC founded the electric car brand SOL in China.

The Reuters report citing Volkswagen’s interest in JAC refers to “people familiar with the matter”. The two carmakers have already cooperated on several levels, have had their own joint venture since 2017 and recently announced the joint construction of an R&D centre in China. In April 2018, VW and JAC also launched the electric car brand SOL, under which electric vehicles are to be produced for the Chinese market. To date, the German company has not held any shares in the Chinese manufacturer.

Until now, it was considered to be a given that VW’s China offensive would be based primarily on its long-standing partnerships with FAW and SAIC. This can be seen in the fact that Volkswagen’s MEB kit will only be made available to the joint ventures FAW-Volkswagen and SAIC Volkswagen – whereas it was previously said that JAC would not benefit from the MEB. There is a good chance that the balance of power will change if Volkswagen manages to acquire a large stake in JAC. In any case, the ambitions of the German car manufacturer on the Chinese market are quite large: within two years Volkswagen intends to launch more than 30 new models with electric and plug-in hybrid drives on the Chinese market, half of which will be produced locally and the other half imported. The aim of the Wolfsburg-based company is to deliver around 400,000 electrified vehicles by 2020 and to increase this figure to 1.5 million by 2025.

Meanwhile, a large stake acquisition in JAC will only be possible at all if the Chinese government relaxes its protectionist policies, as announced last year. China is gradually abolishing the joint venture requirement for foreign car manufacturers and is easing the restrictions on foreign ownership in Chinese production companies that have applied so far.

And that is not all: SK Innovation is now confirming talks with Volkswagen for the first time about setting up a joint venture to build a battery cell factory for electric cars. But nothing has been decided yet, according to media reports. Volkswagen has already stated on several occasions that it will “intensively examine the participation in its own battery cell production in Europe”. As reported, however, these plans are allegedly being torpedoed by the current suppliers – above all LG Chem.