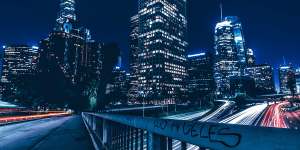 Los Angeles Mayor, Eric Garcetti has just introduced a target for the eradication of CO2 emissions in all transport, housing, industrial and governmental applications by 2050. By 2025, electric vehicles in the city shall increase by 25% and 80% by 2035.

Garcetti’s vision for transport in Los Angeles is inclusive and emission-free, he says. This means the expansion of public transit services, including an increase in the percentage of all trips made by walking, biking, micro-mobility / matched rides as well as concrete targets for the uptake of electric vehicles and corresponding infrastructure.

To get cars off the road, the city will conduct a congestion pricing pilot program in 2025. In specific targets for electric vehicles and charging infrastructure, the following measures are to be implemented: 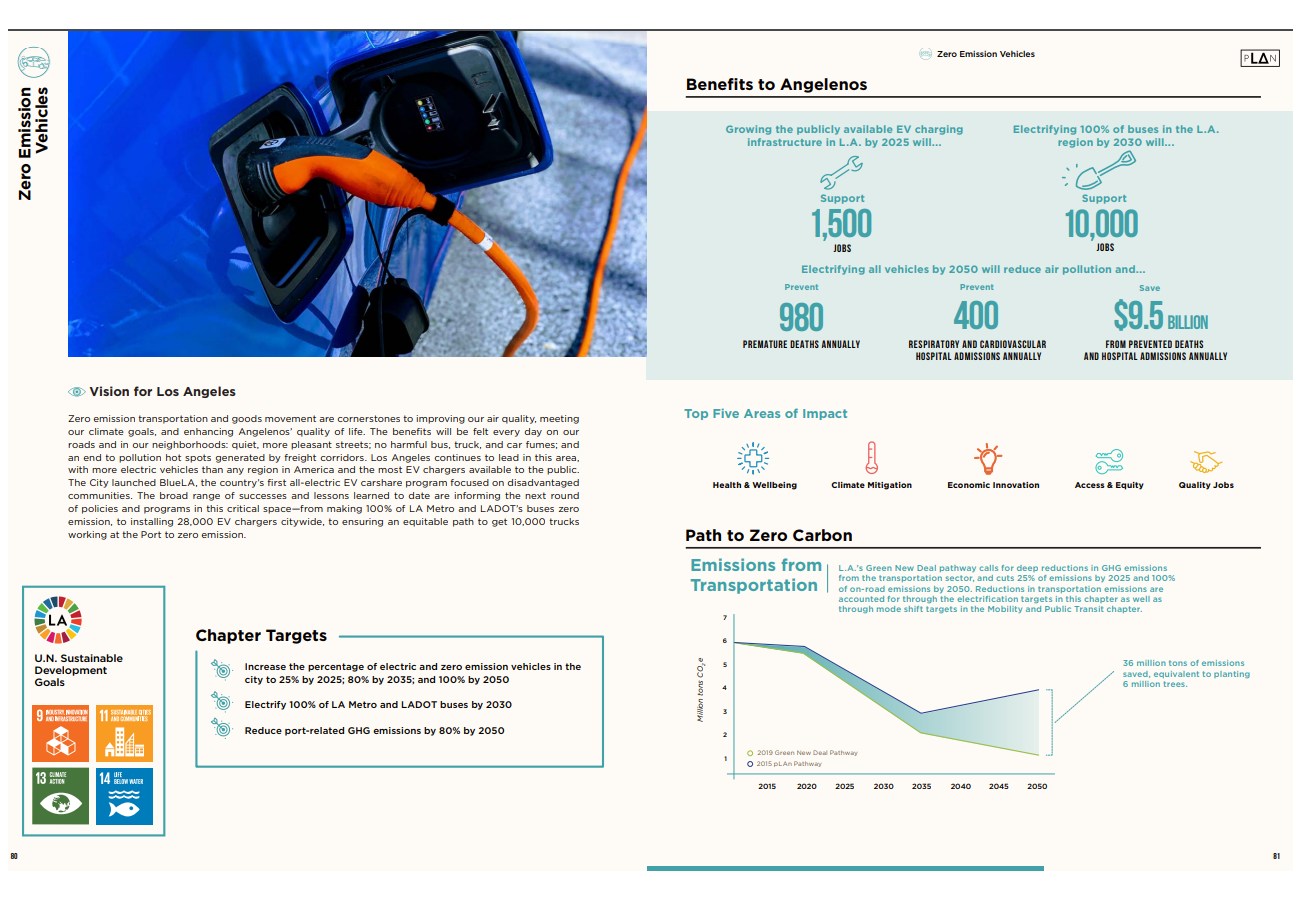 In the so-called pLAn for the city, Garcetti also includes reducing industrial emissions, targeting water use, renewable energy (55% renewable energy by 2025; 80% by 2036; and 100% by 2045), food resilience (accessibility to local produce, increase in local urban production), buildings, recycling, waste and resource recovery, public space resilience (such as shaded stops to reduce heat-exhaustion) and regreening the city with tree planting and green spaces programs. Overall, a focus on resiliency protecting the town against future climate change, shocks and unexpected disasters. 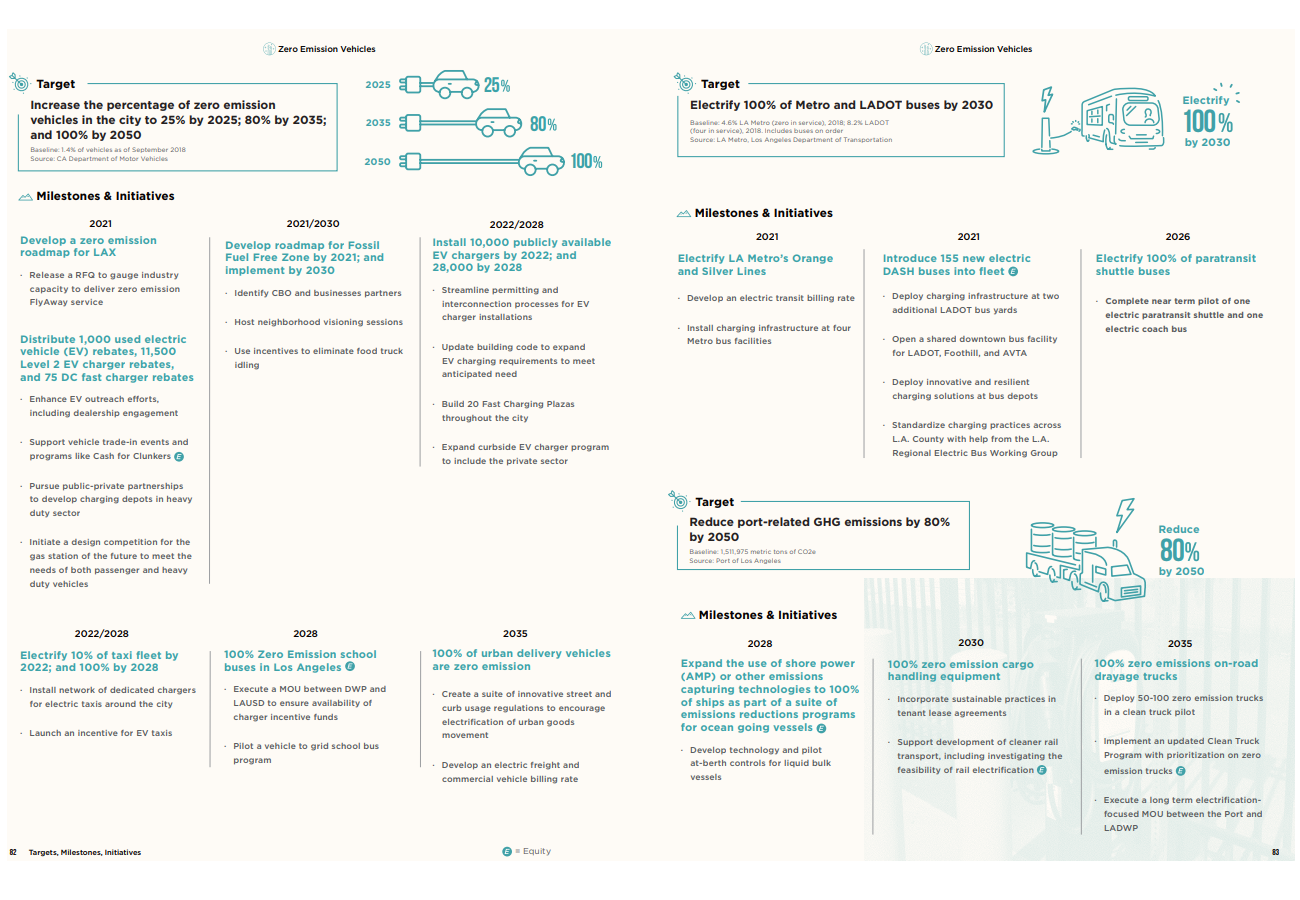 Los Angeles is famous for its vast swathes of car-dependent suburbs. Garcetti has therefore focussed on affordability and accessibility of transport options. The Green New Deal pLAn promises that the cities plans for mobility and public transit will ensure all City residents have access to high-quality mobility options within a 10-minute walk from home.

Exact details and funding for programs are not detailed in the sustainability plan, but the City names community and private sector actors who are committed to executing this strategy. The City has partnered with several organizations, such as Liberty Hill Foundation, which may offer significant rebates (potentially up to $14,000) to individuals or families to purchase new or used electric vehicles, and are working with URB-E to replace gasoline-powered delivery vehicles with a foldable electric scooter for some last-mile goods delivery with zero emissions. Already last year the city’s innovative initiatives, such as the LAPD patrolling with speed pedelecs by Bosch drew positive attention to the sprawling city.

The mayor’s measures will not be without some resistance. Already, for example, the efforts of state officials to develop policies to electrify buildings have faced pushback from Southern California Cas Co. which sees electrification as a threat to its business model. In this case, though, it seems that friction can be productive: the gas company has talked up the benefits of eventually replacing the natural gas in its pipelines with hydrogen.


In a recent interview, Los Angeles Mayor Eric Garcetti said that even with the falling costs of renewable energy and electric cars, he expects meeting the targets to be “messy and difficult” politically. Already different labour unions are protesting Garcetti’s decisions supporting the pLAn, such as deciding not to rebuild three coastal gas plants.

Mayor Garcetti has also introduced a Jobs Cabinet that will help fill an estimated 400,000 positions expected to be created by 2050 in the transition to renewable energy and carbon neutrality, which includes installing solar panels and constructing energy-efficient homes. Growing the publicly available EV charging infrastructure in L.A. alone is expected to support 1,500 jobs by 2025.

EU: CO2 reduction targets for trucks as good as agreed