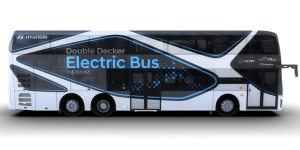 More passengers with the same dimensions and emission-free: Hyundai has introduced its first electrically powered double-decker bus. When and in which countries the new 70-seater will be sold has yet to be revealed. Also new from the Korean company is a system for smaller electric commercial vehicles.

Hyundai presented its latest vehicle for the first time at the “Land, Infrastructure and Transport” trade fair in South Korea. With a length of 13 meters and 70 seats, the electric double-decker bus will be able to transport 50 per cent more passengers than a comparable conventional bus. The bus has a battery pack with 384 kWh, which the manufacturer says allows a maximum range of 300 km. The vehicle is supposed to help reduce congestion and environmental pollution in local public transport.

The development of the vehicle began in 2017 and was supported by the South Korean Ministry of Land, Infrastructure and Transport. On the lower level, there is space for eleven passengers in addition to the driver, and there are also two fixed places for wheelchairs. Thanks to an automatic ramp and the low floor, these should be particularly easily accessible. On the upper level, there are 59 additional seats.

The Korean company has also developed a new system for smaller commercial vehicles. This system uses the data from the acceleration sensors to detect the current load on the truck or van. Determining the weight in real time makes it possible to regulate the torque output of an electric motor more precisely. If the vehicle is lightly loaded, it reduces the torque and can thus prevent the drive wheels from spinning – this is more efficient than classic traction control and increases the range. The software also takes topography into account and regulates power output according to load and gradient.

The special feature is that the system only works with the acceleration sensors. Comparable systems require weight sensors that are installed in expensive air suspension systems. According to the manufacturer, Hyundai’s new development also works with coil and leaf springs. It should also be possible to offer it in cheaper vans – and with its optimised range, it should also make electric vans more attractive for smaller companies.