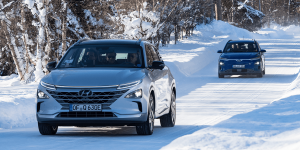 Hyundai also intends to sell its fuel cell drive systems to competitors in the future in order to ensure faster worldwide acceptance of the technology – and of course also to recoup part of the high investment costs.

Hyundai plans to invest 6.7 billion dollars in fuel cell technology over the next ten years, and simultaneously, billions more in battery electric cars.

A lot of this investment has to be recouped by the company’s bottom line. While it seems counterproductive to sell the newly developed technology to the competition, this will serve additional aims for Hyundai. In order to popularise the technology, as well as drive the technological infrastructure behind it, fuel cell vehicles will have to become a bit more mainstream on the global stage. Hyundai is also not the only company experimenting with cooperative approaches to popularise fuel cell technology.

“If we do not actively work in the global market, we will be dependent on our own companies’ car sales,” said Sae Hoon Kim, head of the fuel cell department at Hyundai in an interview: “Today maybe it is competitive but in the future we cannot grow.”

Hyundai and Toyota have the only two freely available fuel cell vehicles on the market, the Nexo and the Mirai. Mercedes-Benz is just beginning to catch up with the GLC Fuel Cell, but it is currently only available to selected customers in a special leasing model.

While Toyota is considering licensing its fuel cell technology and sharing it with partners from China, the Koreans have decided to sell only finished fuel cells. “Licensing will be difficult as there are too many sub-components within the stack and the system, which should be controlled precisely during the production process,” Kim added.

Hyundai and Kia announced in December that they would increase their annual production capacity for fuel cell systems from the current 3,000 to 700,000 units by 2030. 500,000 of these will be used in passenger cars and commercial vehicles. As previously reported, there is an agreement with the Swiss company H2 Energy to supply 1,600 fuel cell trucks by 2025.

Hyundai already has a partner for the fuel cells – but in a different area. In 2018, Audi and Hyundai signed an agreement to cross-license fuel cell patents. Audi is responsible for fuel cell development for the entire VW Group and intends to present a new prototype before the end of this year.