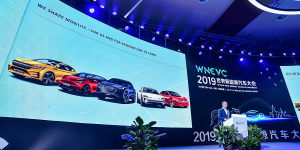 Volkswagen is also committed to the goal of increasing the number of electric cars to a 50 per cent share of all of their deliveries in the country by 2035. “We are playing a central role in this transformation by offering a comprehensive range of electric vehicles and strengthening private charging infrastructure,” said the VW CEO at the Congress.

In his speech, he also emphasised that a predictable and reliable legal framework was necessary for the further expansion of electric mobility in China. Diess expressly welcomed a further opening of the country. It was only in June that it became known that China might open its electric vehicle market to foreign battery manufacturers. According to a government statement, the list of recommended battery suppliers, on which no foreign companies were listed at the time of publication in 2015, was deleted as part of administrative reform. In addition, the limit on the number of registration plates available to electric cars was removed on the local level and subsidies, that were more advantageous to domestically produced electric cars are being phased out.

To be able to sell the planned 11.6 million electric cars – more than half of the total target – in China by 2028, all three of VW’s China joint ventures will be thrust into action: SAIC-Volkswagen and FAW-Volkswagen are to build 600,000 MEB-based electric cars per year from 2020. Besides, JAC and Seat are developing their platform for smaller electric vehicles. To design all the cars, the Group is strengthening its development work in China, where more than 4,500 engineers are working on future technologies.

Volkswagen is also participating in a new joint venture to improve the charging infrastructure. As part of the cooperation between Star Charge, FAW and JAC will offer private wall boxes from the end of this year and will build a large number of public charging stations.